I have fallen way behind posting to my site.  Since August, I have had a lot of experience and hopefully with the new year I will be able to catch up and post some new experiences.

All of my “good” cookbooks were lost in the 2016 Great Flood Of Louisiana, so I have spent numerous minutes looking at recipes, trying to come up with something good.  I have been inspired by several websites.

This is my low-carb pizza:

Heat small (8″) skillet over medium/high heat. Beat together large egg and Italian Seasoning in small bowl. When skillet is hot, spray with cooking spray and pour in egg. Adjust skillet so the egg is cooking evenly. Turn on the oven’s Hi boiler. Sprinkle the cheese evenly over the egg mixture. The egg does not need to be cooked all the way before adding cheese. Place pepperoni on cheese. Cooking until the cheese is mostly melted and the peperoni has a glimmer.

Remove skillet from heat and place under the boiler. Let cook under boiler until desire crispiness. Watch closely, it will only take a couple of minutes until done.  Remove from broiler.  Make sure everything is turned off.

Place on a plate, cut, and serve.

It’s a good think I have a tester to try out all my creations.

This recipe was created after I gave up all flour and I still wanted pizza. 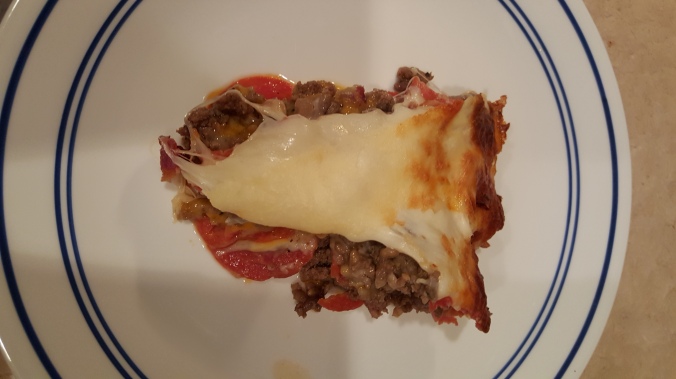 Place Ground Meat in skillet and season to taste with salt, pepper, garlic powder, and onion powder.  A 1/4 teaspoon of each is usually sufficient.  Add Italian Sausage, Onions and Bell pepper. Cook until the meat mixture is brown.

After meat is brown add approximately 20 slices of Pepperoni and 20 slices for Canadian Bacon to ground meat mixture.  This is strictly according to your taste.  I usually add both to the bottom of the skillet and stir.  Let the mixture simmer while you prepare a baking dish.

Bake in Oven for 20 minutes at 400 degrees or until all cheese is melted and turning golden brown.  I usually cook for 20 minutes and  then check every 5 minutes until done.

Let sit for 5 to 10 minutes and slice and serve.

This dish maybe low carb, but it does have a lot of fat.